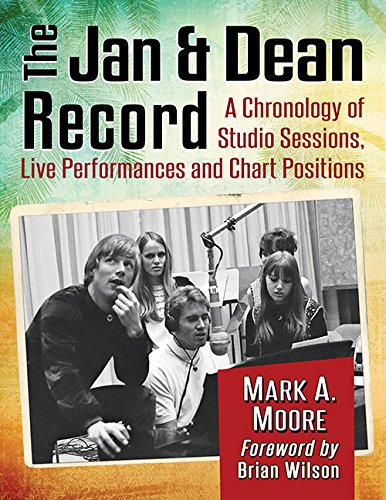 The Jan & Dean Record: A Chronology of Studio Sessions, Live Performances and Chart Positions
By Mark A. Moore

An amazing chronology. I’m completely amazed by this incredible book. This book should be in every music education section of all libraries. An entire world of Rock and Roll history and memorabilia awaits at your fingertips. I had the chills just reading this compilation of one of the greatest duos of the Rock and Roll era. . . . For me, just memories that make the hair on the back of my neck stand up among the goosebumps. The kids, as I refer to them, were just kids when I was first introduced to these wild and crazy guys. Not only contracting for them but also recording, dual drums, for Jan & Dean hits . . . hitting the road at times with them, on stage, and ‘sort of’ road managing. . . . They were teenage idols of the Rock world. Jan experimented with me and the great Earl Palmer on dual drums. . . . I was so proud to have been a part of their lives and their skyrocket ride to fame and fortune. You will read all about it, and all of their hits. . . . So get comfortable and enjoy their explosive ride. . . . Author Mark Moore worked for so many incredible years getting this special story perfect. No doubt a poignant film will emerge, perhaps worthy of an Oscar. Gratefully,

HAL BLAINE, of the Wrecking Crew, the world’s most famous drummer. Hal played on many sessions for Jan Berry and Jan & Dean in the 1960s.

I liked it a lot. . . . [Mark A. Moore] did a lot of research. And I actually used it to come up with specific dates and stuff that I didn’t remember, for my book. So it became very helpful to me, at least to make it a little bit more detailed by knowing the actual date that something happened. So I thanked him for that. . . . [The Jan & Dean Record] was a lot of work. . . . God, it made me tired just reading it.

This is a long awaited and thoroughly engaging book author Mark Moore has put together on the music, careers, and personal lives of the enormously successful music duo Jan & Dean. It is filled with details of all their business transactions, personal lives, and music sessions including the musicians and singers who were on those sessions, many of whom are featured in the film, The Wrecking Crew. Of particular interest to me is the chronology of Jan Berry’s personal and professional development from his high school days, where his interest in music began, all the way up to his passing in 2004. He was an amazingly talented, ambitious, and dynamic person. For me it is an especially poignant read learning about Jan’s early life and discovering professional details I didn’t know about during my 5 years with him as his partner and collaborator. It filled in many blanks in our personal history. This is a comprehensive and fascinating read for anyone interested in music of the ’60’s in which Jan & Dean were enormously influential.

JILL GIBSON, Songwriter, Painter and Sculptor. Co-writer of “It’s As Easy As 1, 2, 3,” “You Really Know How To Hurt A Guy,” and others. Former member of the Mamas & the Papas. Jan Berry’s former girlfriend and collaborator.

Not even the Beatles have had so much detail on their career written in one book. If it is not in these pages, then it probably never happened. Rarely is the history of anything so well recorded. It’s the only book that accurately tells the story behind my writing of “The Road Back From Dead Man’s Curve” for Rolling Stone (1974), which led to the film about Jan & Dean titled Deadman’s Curve (1978). It’s also a lifetime story, the author’s love of everything Jan & Dean.

PAUL MORANTZ, author of Escape: My Lifelong War Against Cults and From Miracle to Madness: The True Story of Charles Dederich and Synanon 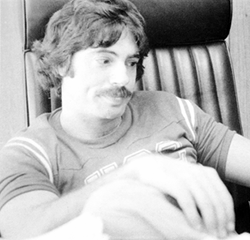 Congratulations on your documentation of The Jan & Dean Record. Your research and timeline with the facts sparks a 10-Plus. For pop music fans remember Jan Berry was producing, writing, and singing on hit records before Gary Paxton, Brian Wilson, Phil Spector, and Terry Melcher. Jan & Dean belong in the Rock ‘n Roll Hall of Fame. Some of my greatest memories in the music and radio years were with Jan Berry and Dean Torrence.

Whenever the songs and stories of California are sung and strung, one name—one very important name—is most often left out. A man who, beginning in the late 1950s with a bank of audio equipment in his Bel Air garage actually invented, or at least kick-started, the entire Los Angeles independent rock scene. . . . The man I speak of is William Jan Berry. . . . Thankfully, one man above all is helping keep Jan’s life and legacy, both on record and off, alive and well. Mark A. Moore’s landmark Jan & Dean Record remains the reference book on all things Jan, in the process recounting the very birth and growth of the Los Angeles rock industry.

Mark A. Moore, Jan Berry’s official biographer and author of The Jan & Dean Record: A Chronology of Studio Sessions, Live Performances and Chart Positions, has done an extraordinary forensic job of unraveling both the creative details and legal wranglings behind Jan’s post-accident recordings, and the factors and conspiracy of fate that ultimately torpedoed their release. . . . [The Jan & Dean Record] and Dean Torrence’s Surf City: The Jan & Dean Story serve to form a definitive take on the duo. 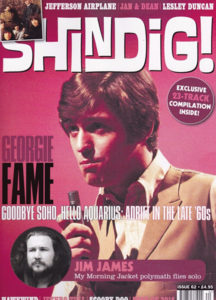 An extraordinary book in which the sheer volume of minutiae combines to engulf the reader and immerse them completely in the world of Jan Berry. . . . The level of detail in the chronology is nothing short of astonishing. . . . The Jan & Dean Record can also be read as a conventional and thoroughly absorbing Berry biography. The chronology is fleshed out with large chunks of narrative text detailing the events of Berry’s life—and what a life it was, as compelling and, ultimately, tragic as anything you could find in fiction. Berry had it all. . . . He lived the first 25 years of his life in top gear, without any regard for rules or consequences. . . . He was a fine songwriter, and an exceptionally gifted arranger and producer. . . The details of [Jan’s] traumatic [car] accident are covered in scrupulous detail here for the first time. . . . The last three decades of his life, his efforts to make a living in the music industry, with and without Dean, make for sometimes depressing reading. . . . This book is an astounding monument to Berry’s many accomplishments, but also a heart-breaking cautionary tale about a life lived too fast. Beyond definitive, it raises the bar for the rock chronology format to a level that may never be surpassed.

Jan Berry . . . possessed a very precious and rich talent for arranging pop tunes and producing records, a fact that too often has been overlooked. . . . Berry wrote songs that changed the American music scene and started what was later named the “West Coast Sound”. . . . This book covers Jan’s and the duo’s history from 1958-1969 on an almost daily basis, and several thousand hours of research must have gone into this undertaking. Many comments, memories, letters and personal anecdotes of Berry’s friends and family add up to a very detailed portrait of this important musician. . . . The history of surf music and the California sound just got updated by Moore.

Not only are Jan Berry and Dean Torrence’s musical career chronicled through studio session notes and very interesting anecdotes, it is painstaking in its information on Jan Berry’s near-fatal April 12, 1966 car accident — providing a diagram, police reports and witness accounts, and shooting down wrong information that too many writers chose to use. Berry’s long rehabilitation process is also chronicled to a great extent.

It is impossible not to applaud the depth and scope of research that must have gone into putting together this weighty tome about the Californian Titanic Twosome. . . . Some will be after chart facts, others may look for recording session details, while there will also be an audience for background stories and info; all of these are here. . . . There is a wealth of visual material along the way, and you do feel confident about the veracity of all of the content.

A lot of raw information of great interest to Jan & Dean fanatics.

It was fifty (!) years ago that I first encountered “Popsicle” out on my schoolyard playground, and it can still remind me this full half-century later of what a unique and, yes, playful talent William Jan Berry was. But the man wielded a pure and prodigious musical force of simply staggering means as well, and The Jan & Dean Record, as no book before (or need be in the future) examines it all in full and fascinating detail. Mark A. Moore, as always, has researched his subject with utmost thoroughness, presenting in the process an actual, factual rendering – at last! – of the very birth of California Rock. Jan and his ever-faithful sidekick Dean O. have long deserved such a close and respectful recounting; Mark’s book does that . . . but so much more as well. 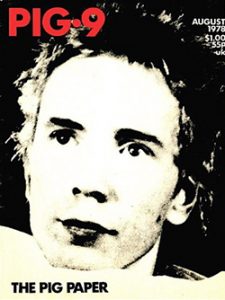 Moore brings Jan Berry into a spotlight most have not seen him in. . . . [He] takes us through the joyful and painful story of Jan & Dean’s career not only with words but also with 164 visual delights . . . a collection worthy of an exhibition. . . . The Jan & Dean Record is a worthy graduate level text for fans and aficionados. . . . [I]f you’re looking for an authoritative, almost-daily documentary-in-print, then look no further than this tome. Preserving the legacy of Jan & Dean, and telling the story of how they made rock and roll history. Mark Moore has done it well. 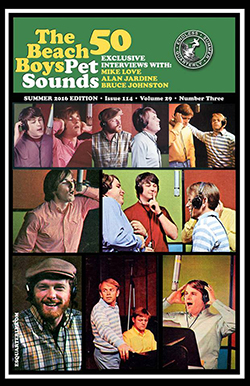 A book that examines the career of Jan Berry and Dean Torrence in very strong detail . . . Absolutely essential. It’s a beautiful piece of work. . . . It’s not just your dry collection of facts. Lots of great biographical information on Jan & Dean’s career, and Jan Berry’s history. . . . Have your mind blown by the artistry of Jan Berry.

A rich trove of information on the creation, work, and life of an important group in the 1960’s Southern California music scene and beyond. . . . Author Mark A. Moore brings the story to life with reminiscences by family members, friends, and music business associates. . . . The book will interest many readers (including the generation that grew up listening to Jan & Dean) and those concerned with the history of popular music in America. Recommended.

This is a fat book . . . a heavy book. . . . You will learn a lot about the music business and a lot about Jan & Dean. . . . The big career of Jan & Dean was basically from 1958 until 1966, because something happened in 1966 that kind of interrupted the possibilities. . . . The essence of the importance of Jan Berry is that he does it all. He writes the songs, he’s involved in producing them. . . . He was given to trying lots of different angles. There were lots of takes of the songs. . . . Not only is it a kind of biography of Jan & Dean, and a more full biography of Jan Berry, it is also a reference work. You can learn an aweful lot about the different aspects [of the music business in the 1960s].

The author offers the complete book on the personal and professional lives of Jan & Dean. . . . Of special note is the coverage of Jan’s horrific 1966 car crash that almost killed him. The text contains loads of photographs and source material. . . . For the serious Jan & Dean fan.

• ROCK'S BACKPAGES: A Walk on the Wet Side: Gary Pig Gold in Conversation With Mark A. Moore

• PRAY FOR SURF: Jan Berry Interview with Mark A. Moore